The boom in economic growth at the end of the nineteenth century brought about more than just a surplus of efficiently manufactured goods. It also introduced a new concept of leisure. With efficiency and productively at an all time high due to the so-called Second Industrial Revolution, or the application of research science to industry, as well as the continued expansion of the first industrial revolution, or use of machines in relation to economics, the growth of leisure was facilitated by massive economic growth between 1870 and World War I.

Higher domestic wealth and the introduction of machines that replaced labor allowed for a decrease in the number of hours an individual would work. In 1860, the average worker clocked approximately 66 hours a week, however by 1890, the number of hours was down to 60, leaving an extra 6 hours a week for other non-work related activities. The Bank Holiday Act passed 1871 granted their workers paid holidays, a few years later skilled workers in other professions were allowed paid annual holidays as well. Prior to the economic boom of late 19th century, workers only had Sunday off for religious purposes. It wasn’t until the 1870s workers began having Saturday free as well, thus the weekend was born and began curating people’s lives with more leisure time.

More money and less work introduced a new concept of passing time known as leisure activities. By having time to do more than provide for one’s family, people of the middle and upper classes found interest in hobbies, of which collecting was particularly popular.

A descendent of the 16th and 17th century’s curiosity cabinets, in which unusual, exquisite and ‘monstrous’ objects were displayed, collecting in the late 1800s took a more scientific turn. Spending time searching the land for unique objects from nature and gathering ancient artifacts such as Indian relics produced desires for ways to display, store, characterize, and archive the works. William S. Teator treated his collecting as naturalism, gathering shells and Indian artifacts from his land and the surrounding areas. Although his individual passion remained prevalent, there were several other factors that lead to Teator’s thriving success in collecting.

Click the items in the cabinet to learn more. 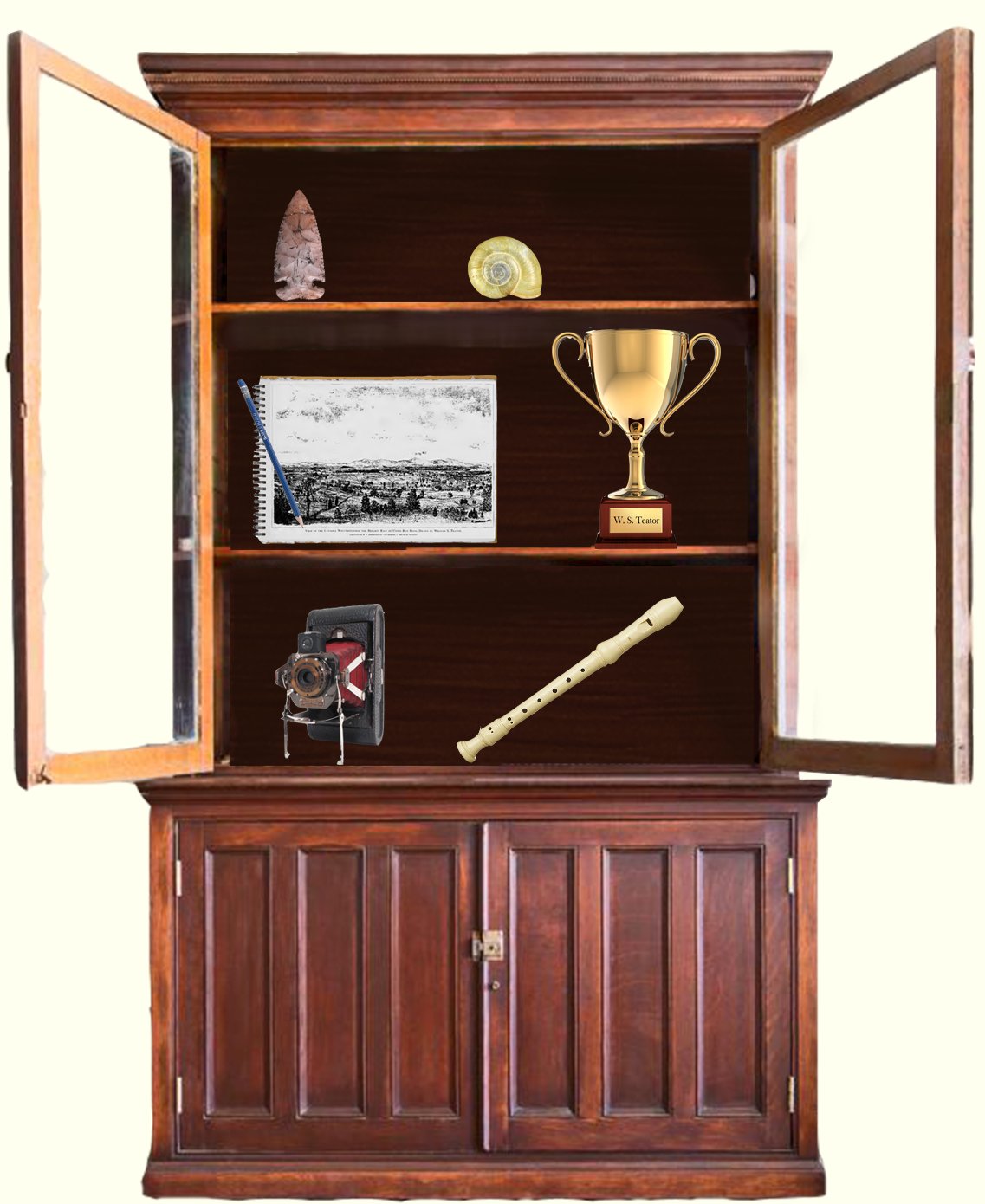 Not everyone had equal access to resources that allowed for abundant collecting. Wealthy individuals had money to traverse great areas and collect rare items. Farmers like Teator possessed great quantities of land, which sometimes would have a myriad of different species and artifacts beneath the soil. Farmers would collect fossils and relics off their land as well as the beaches of riverbanks. It was advantageous that Teator had access to one of the most diverse landmarks in the North: The Hudson River.

Not only is the Hudson River abundant as an ecosystem: in its historical context, Native Americans had dwelled there for over 5,000 years. In early 1600 there were approximately 10,000 Native Americans living on both banks of the Hudson River. The different tribes’ territories expanded far across the land. The Mahicans held land from the north of Albany to the west bank of the Catskills, all the way to the edge of the sea. The Mohawks controlled the areas beyond Schenectady and the Lenapes extended south to the sea and west to the Delaware River. These “River Indians” lived comfortably off the land and flourishing environment the Hudson River provided them.

Because of Teator’s wealth, profession, and close proximity to the Hudson River, he was able to acquire large collections of shells and Indian artifacts. Several of these were donated, and now reside in major collections such as the Smithsonian and the Museum of Natural History.

Teator’s other hobbies included photography, of which he greatly documented the Teator farm and surrounding areas, along with the people who lived there. Throughout his lifetime Teator also had a passion for painting and sketching, as well as playing the flute, fife, and recorder. He also won many awards for his apples. It was no surprise that he was called a Renaissance man by the local community.

Where did Teator gather his collections?

William S. Teator was an apple farmer, but also a collector. His scientific, systematic approaches to farming were mirrored in his collecting. No mere hoarder of objects, Teator acquired his collections with care and enthusiasm. He was a “collector of Indian relics,” as well as a member of the American Association of Conchologists.

Shells were one of his passions. He would search along the shores of the Hudson, looking underneath logs and throughout the adjacent forests. Teator knew how the weather affected the specimens: after a summer rain, colonies of Succinea obliqua could be found by tree trunks and bushes. In the winter months, H. palliata were surprisingly numerous while most other species hibernated. When he collected, he would sketch the areas in which he found his specimens. He also recorded where he found a given shell. Sometimes he included latitude and longitude, but usually just a place name.

This map draws from collections information from The Academy of Natural Sciences of Drexel University in Philadelphia, Pennsylvania; the Museum of Natural History at University of Michigan in Ann Arbor, Michigan; and the Delaware Museum of Natural History in Wilmington, Delaware. In some cases, data points are less specific than Teator’s notes describe. When Teator would cite a certain cove or shore of the Hudson, the exact latitude and longitude are not readily available. Instead, less specific town names and coordinates are included in such cases.